A Brief History of Companioning the Dying, Inc.

Companioning the Dying, Inc.(CTD) is primarily the outgrowth of the life and service of Rose Mary Dougherty, SSND, who spent over 30 years in accompanying the dying in her family, in hospice, and in her own and other religious communities.

Rose Mary was inspired to create what has become CTD’s Core Program, Companioning the Dying: Opening Fully to Living, out of her experience in companioning a priest, a longtime friend and colleague of hers, in his final months. Often when she would visit her friend in the nursing facility, she encountered another priest who was a member of her friend’s religious community. This other priest was partially paralyzed, but every morning would wheel himself over to be with their dying friend. He and Rose Mary would often sit for hours together with very few words spoken between them or to their friend. She began to observe how he companioned their friend: sometimes praying aloud, sometimes holding their friend’s hand, but mostly simply being present, seeming to take his cues from the Spirit animating both their friend and himself. As she observed this, Rose Mary began taking her cues from him. 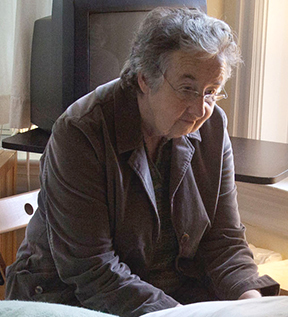 Staff of the nursing home also observed this priest’s quiet, attentive companioning and would sometimes ask if he would sit with other patients who were dying. They didn’t need him there in his priestly role; rather they simply wanted him as one human being who knew how to be present with another. One day he said to Rose Mary, “I don’t have the right words any more, I don’t know what a priest should do, but I can be here and maybe this is my final vocation.”

Rose Mary was so inspired by this priest that she began to envision a program for those who sensed in themselves a similar calling to companion the dying. She invited Amy Hoey, RSM, to join her as co-director of the new program. Out of their experiences in being with the dying, and from Rose Mary’s experience in the End of Life Practitioner’s Program of the Metta Institute, they created a program that would empower and support persons both in companioning the dying and in living fuller, more courageous lives.

In 2008 with the aid of a small start-up grant, they conducted a successful pilot program in the Washington, DC area. In 2009 CTD was incorporated as a nonprofit corporation and shortly thereafter was approved by the IRS as a 501(c)(3) tax-exempt, charitable organization. Through 2016 over 150 people have completed the Core Program, coming primarily from the Washington-Baltimore area, but also from throughout the Mid-Atlantic region. In 2013 in response to increasing interest in the Program in the Baltimore area, a second Core Program class began to be offered in Timonium, MD.

In 2012 CTD began offering public outreach programs, beginning with a lecture and workshop with author, lecturer, and CTD advisory council member Kathleen Dowling Singh, PhD. Similar public events have been and are planned to be offered in future years.

Rose Mary Dougherty was inspired to create what has become CTD's Core Program, Companioning the Dying: Opening Fully to Living, out of her experience in companioning a priest, who was a longtime friend and colleague of hers, in his final months.